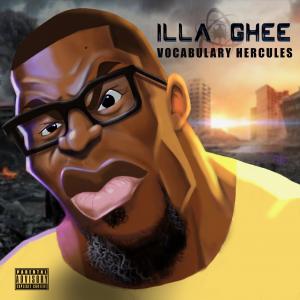 Keeping it simple but still driving the point, Illa Ghee is the Vocabulary Hercules.

There is strength in simplicity”
— Illa Ghee

BROOKLYN, NEW YORK, USA, September 24, 2021 /EINPresswire.com/ — Imor Entertainment is thrilled to announce the release of hip-hop recording artist Illa Ghee's latest album. The project is a reminder to listeners that his mastery of storytelling remains the crux of his talent and being. Never short for words or experiences, Illa Ghee continues to focus on making music that is painfully honest.

This album is a departure from previous works, which were heavy laden with complex rhyme schemes, hidden references, similes, and obscure metaphors. "VOCABULARY HERCULES" is the realization that story telling can be straight forward and still highly impactful. In a previous work, "The Whole Half of It", Illa Ghee was cautious about relaying details of a complicated upbringing in the streets. In contrast, this was the exploration and finding freedom in speaking freely without restraints or the need to make knotty. What hasn’t changed in this project is Illa’s verbal dexterity, uncanny sense of humor, and his gritty unapologetic delivery of his life experiences.

The album showcases production by Crummie Beats, Jewels Polaar, INTLMC, Preach, Audible Doctor, Tru Mentillz, and Black Milk. When it came to selecting the tracks, it was important to Illa Ghee that listeners had something to nod their heads and still be able to focus on the lyrics.

"Vocabulary Hercules" is now available on all streaming platforms. Stream "Gold Soap" the lead single on iTunes or watch the video on YouTube. For more about Illa Ghee's music, merch, and other content, visit his website.