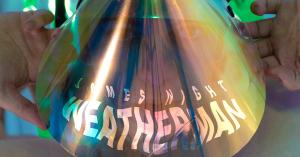 Official artwork for Weatherman, an album by James Night

The debut album from the rising artist delivers heavy pop production with poetry as a foundation.

We are excited to announce the release of James Night’s album “Weatherman", which will be available worldwide on Friday, October 1st. This self-written pop-electro record delivers 14 songs track-list including the title track “Weatherman”. In addition to his album, jamesnight.com (also launching in October) will present listeners with heightened experience of the album, lyrics, behind the scenes and growing media library for fans to enjoy.

Two and a half years in the making and over three hundred songs written in that period. Behind the lyrics, there is a philosophy about being at peace with who you are. Weatherman steps into a world without self-doubt. It is a poem acknowledging that you have lived through many storms, but at the end you decide to take the control back and confidently pace forward. Changing perspective towards own life and liberating yourself from dwelling on the past events that can not be changed.

Fast pacing track-list gives enough air time for every song to shine on its own, but still – there are some noticeable standouts such as "Natalia", "Rosé", "Replay" and "Unknown". Every song delivers a story. For example, Natalia tells a narrative that happened seven years ago, a love story following the Night that is in love with a girl, in love with another girl. Understanding her troubles, Night decides that the best thing to do is to let her be her true self. As years pass, wondering where she's gone, Night sees a familiar face on the street. Seven years later, after transitioning, he is the happiest he's ever been. Story is packed up in beautiful, mesmerizing melody and huge synths. Unknown is an upbeat song about finding your true self. Rosé, with its naughtier lyrics, delivers sexier mood, Moonlight reflects on escaping the reality and being "saved" by music and good time… Whether it inspires you or makes you feel nostalgic, Weatherman does not look back on the past, but uses it as a weapon to teach a lesson in every song.

With years of experience in poetry and numerous awards for his poems, Night is a lyricist foremost, but massive synths, hard hitting beats and pure pop, with influences of 90s and electronic music – delivers the sung poetry in an almost commercial form.

Weatherman is a state of mind as Night says. It is not about being self-centered, it simply tells a story about a healthy relationship towards yourself.

Listen to Weatherman on all streaming platforms, worldwide.