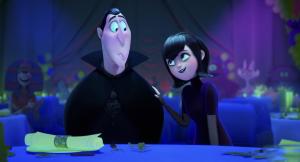 Drac and the Pack are back, like you’ve never seen them before in Hotel Transylvania: Transformania. Reunite with your favorite monsters for an all-new adventure that presents Drac (Brian Hull) with his most terrifying task yet. When Van Helsing’s (Jim Gaffigan) mysterious invention, the 'Monsterification Ray,’ goes haywire, Drac and his monster pals are all transformed into humans, and Johnny (Andy Samberg) becomes a monster! In their new mismatched bodies, Drac, stripped of his powers, and an exuberant Johnny, loving life as a monster, must team up and race across the globe to find a cure before it’s too late, and before they drive each other crazy. With help from Mavis (Selena Gomez) and the hilariously human Drac Pack, the heat is on to find a way to switch themselves back before their transformations become permanent. The film also features the voices of Kathryn Hahn (Ericka), Steve Buscemi (Wayne), Molly Shannon (Wanda), David Spade (Griffin the Invisible Man), Keegan-Michael Key (Murray), Fran Drescher (Eunice), Brad Abrell (Frank), and Asher Blinkoff (Wesley the Wolf Pup).

“The success of the Hotel Transylvania franchise over the years speaks for itself,” said Jennifer Salke, head of Amazon Studios. “Audiences around the world have fallen in love with the films created by the brilliant Genndy Tartakovsky, and the latest installment is the perfect ending to an incredible journey. We could not be more excited to work with Sony, Genndy, Jennifer Kluska, Derek Drymon, Selena Gomez and the talented producing team to bring this funny, heartwarming film to our customers early next year.”

“The Hotel Transylvania franchise has been exceptional for Sony Pictures Animation, spanning nearly a decade and introducing the world to Genndy Tartakovsky's singular vision, and we’re so proud of what our extraordinary directors Jennifer Kluska and Derek Drymon have brought to this special property,” said Kristine Belson, president of Sony Pictures Animation. “These films have thrilled audiences and paved the way for so many artists working in CG animation, and now the family saga of Dracula and his daughter Mavis, son-in-law Johnny, and monster BFFs is coming to a close. We are thrilled to work with Amazon to bring this film to families everywhere.”

About Prime Video
Prime Video offers customers a vast collection of movies, series, and sports—all available to watch on hundreds of compatible devices.

● Prime Video Channels: Prime members can add channels like Paramount+, BET+, EPIX, Noggin, NBA League Pass, MLB.TV, STARZ, and SHOWTIME—no extra apps to download, and no cable required. Only pay for the ones you want, and cancel anytime. View the full list of channels available at amazon.com/channels.

● Instant access: Watch at home or on the go with your choice of hundreds of compatible devices. Stream from the web or using the Prime Video app on your smartphone, tablet, set-top box, game console, or select smart TV.

● Enhanced experiences: Make the most of every viewing with 4K Ultra HD- and High Dynamic Range (HDR)-compatible content. Go behind the scenes of your favorite movies and TV shows with exclusive X-Ray access, powered by IMDb. Save it for later with select mobile downloads for offline viewing.

Prime Video is just one of many shopping and entertainment benefits included with a Prime membership, along with fast, free shipping on millions of Prime-eligible items at Amazon.com, unlimited photo storage, exclusive deals and discounts, and access to ad-free music and Kindle ebooks. To sign up or start a 30-day free trial of Prime, visit: amazon.com/prime.