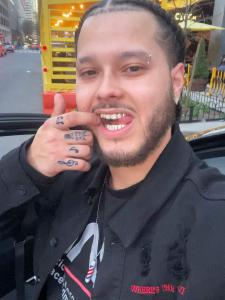 Composing compelling tunes and releasing one song after the other, emerging artist Lil G 100 will be recognized as a talented force in the hip hop scene.

BROOKLYN, NEW YORK, UNITED STATES, October 7, 2021 /EINPresswire.com/ — Up-and-coming artist Lil G 100 is a massive force to be dealt with in the world of music. With especial expertise in the genres of Hip Hop and Rap, the artist is well-equipped when it comes to making unique and original tunes. His brand new single titled “Both Sides” was released around the world in April 2021.

With the release of this brand new single, Lil G 100 is hoping for his sound to go out there and leave a long-lasting impact on the hearts of people. He wants to have a breakthrough in the industry and emerge as a new Hip Hip rapper of the time, gathering himself a loyal fan base who would look out for his future releases and support him through everything. Apart from getting released on most major music streaming/downloading platforms including Spotify, “Both Sides” was also released on YouTube along with a music video. The video was premiered on April 30th, 2021, and was uploaded on the artist’s official YouTube channel. Since the release, “Both Sides” has been receiving a lot of love and appreciation from Lil G 100’s fans all around the world. The song has managed to amass a significant number of streams on Spotify and other streaming platforms worldwide. The talented artist worked on the single all by himself, penning down meaningful lyrics and getting in the studio to record hard-hitting rap verses.

Heavily dominated by themes of Hip Hop music, “Both Sides” is a perfect blend of street knowledge and impeccable writing skills. Lil G 100 used his creative writing skills and street knowledge to bring awareness and vigilance to the real and practical world. The dedicated artist also released another single titled “Yeah Aight” just 2 months after the release of “Both Sides”. The single was released in the month of July this year on Spotify and other music streaming sites, while it was also premiered on YouTube on July 5th, 2021. Dominated by catchy melodies, the song is full of hard-hitting rap verses, groovy beats, and melodies that are capable of bringing parties to life.

Lil G 100 plans on continuing his musical journey, making more music he’s passionate about and exploring himself as an artist. He wants to get himself out there through his music and make people admire him for the kind of art he makes.

Besides making music, Lil G 100 is also a Barber. He speaks Spanish and English, and is super creative when it comes to creating music. He has been doing music for 1 year now and plans on continuing this journey.