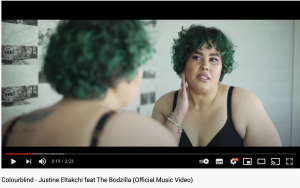 The Bodzilla featuring in Justine Eltakchi’s music video for Colourblind 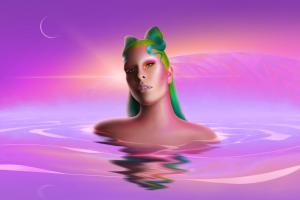 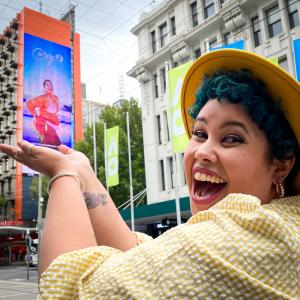 The Bodzilla features on Melbourne billboard

The "Colourblind" music video was a lockdown creation featuring 10 Australian artists and personalities from diverse backgrounds. Featuring The Bodzilla.

SYDNEY, NSW, AUSTRALIA, October 14, 2021 /EINPresswire.com/ — The movement sweeping across Australia is body-positivity for people of all backgrounds. At the front of this change is online personality and advocate April Helene-Horton AKA The Bodzilla.

Since stopping traffic in the stunning swimwear billboard feature earlier this year in Melbourne's CBD, The Bodzilla features on another body acceptance project, the music video Colourblind by ARIA-nominated song-writer Justine Eltakchi. Justine approached The Bodzilla to collaborate when discovering the impactful work she was doing in the body pos space. “I felt inspired to embrace who I was when I discovered the work of April. I realised I had rejected and shamed parts of myself I had deemed as flaws. The truth is we are all different and that is our magic. That's essentially what Colourblind is about and we wanted to bring together people from all groups in the video” says Justine.

April says, “Justine’s song touched my heart the moment it started to play. I was so excited for us to come up with an idea of how we could share the song and our message with more people. It felt like everything was lining up when I told her I’m married to a filmmaker and I wanted to create a clip for the song!”

The Colourblind music video is about celebrating what makes us unique and features an array of Australians from diverse backgrounds surrounding women, non-binary and those from the LGBTQIA+ community. Produced by What's on Media Australia.

This is a special moment for Australians as we make way for these conversations and prompt change in our attitudes and behaviours.