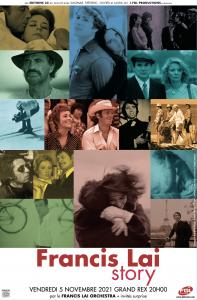 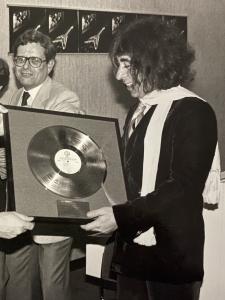 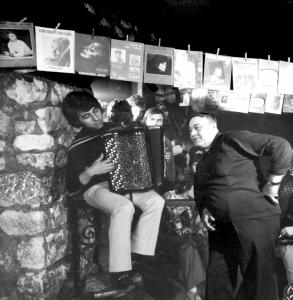 PARIS, FRANCE, October 17, 2021 /EINPresswire.com/ — Editions 23 is proud to announce an amazing opportunity to rediscover the greatest masterpieces of the composer of ‘Un Homme et une Femme’ (A Man and A Woman) : the Francis Lai Story.

Nicknamed by Americans ‘the aristocrat of melody,’ Francis Lai played with Edith Piaf and Mireille Mathieu, before becoming the official composer of Claude Lelouch and working with such great directors as Terence Young, Henri Verneuil, and Dino Risi.

It’s impossible to count the number of famous artists who have interpreted his compositions over the years : Elton John, Petula Clark, Johnny Hallyday, Serge Reggiani, Charles Aznavour, Yves Montand, Nana Mouskouri, Françoise Hardy, just to mention a few. He was the recipient of numerous awards, winning an Oscar for Best Original Soundtrack ‘Love Story’ and the Palme d’Or Award at the Cannes Festival for ‘Un Homme et une Femme’ (A Man and A Woman.)

This exceptional concert, performed by The Francis Lai Orchestra, invites an audience to experience the universe of Francis Lai, who composed for over a hundred movies and more than 600 songs.

The ambassador of French romanticism who, despite an impressive track record of distinctions and awards, he always remained humble, even when holding the record for albums sold abroad for a French composer.

The event will showcase the Strings of the Philharmonie of Paris, the brass Fred Couderc’s team, the piano of Jacky Delance, the accordion of Jacques Ferchit, the bass of Tony Bonfils and the guitar of Jacky Tricoire (eternal ‘partners in crime’ of Francis Lai). The Grand Rex will welcome the most exceptional musicians in order to pay homage to one of the greatest French composers.

Claude Lelouch will open the evening by talking about his favorite composer and will introduce the original performer of the legendary title ‘Un Homme et une Femme’ (A Man and a Woman), who has toured the world : Nicole Croisille.

The latest artist to collaborate with Francis Lai will also be present : Calogero, the singer who worked with the late composer on the last track he recorded.

But also famous Japanese and violonist Reina Kitada, U.S singer Lexie Kendrick, French singers Anne Sila, Katia Plachez, Irene Roussel and actress Elsa Zylberstein are expected, as well as American French duo The French Mademoiselles performers who will come to pay tribute to the man who started his career in the hills of Nice and ended up on the hills of Hollywood.

The concert will be immortalized in a video intended to be broadcasted around the world for the many fans of Francis Lai on all continents, especially in the USA, South America and Japan. For more information about the event, visit : https://francislai.com

Francis Lai was born on April 26, 1932 in Nice. Very early on, passionate about music, he created his first scales in a local orchestra. In Marseille, he first heard jazz and met Claude Goaty, a popular singer of the 50s, whom he would follow to Paris to discover Montmartre, where he settled. Here in this place teeming with ideas and various artistic movements, he met the men and women with whom he would develop his work.

Francis Lai wrote the music for more than 100 films and composed the melodies of more than 600 songs. Planetary Stars and the greatest international orchestras recorded his work, and to this day he remains one of the most succesful composers on the planet.

His work was recognized all over the world, and in 1970, he received the most prestigious prize : an Oscar in Hollywood for the music of the movie ‘Love Story.’

Married to the model Dagmar Puetz, he is the father of three children (Frédéric, Olivier, Laura). His family understood that he liked to work at night, and he would spend weeks or even months refining his compositions.

Francis Lai was also one of the pioneers in the research of synthetic sounds, and in the use of computer music. These works are now published by US rap, British pop and European techno groups, of which he is one of the most trusted influences.