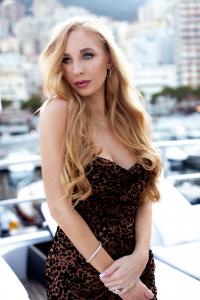 LOS ANGELES, CA, UNITED STATES, October 19, 2021 /EINPresswire.com/ — Elizabeth Stanton, Actress and Host of The CW's "World's Funniest Animals" has been announced as a Special Co-Host of The 89th Annual Hollywood Christmas Parade Supporting Marine Toys for Tots. The parade will be presented live in the streets of Hollywood, CA on Sunday, November 28, 2021 at 6:00 p.m. PST by Associated Television International and The City of Los Angeles.

She says this regarding her co-host duties: "I am truly honored to have been chosen as a Special Co-Host for The 89th Annual Hollywood Christmas Parade Supporting Marine Toys for Tots." She adds, "For nearly a year and a half, the pandemic has made life difficult for everyone. I can't wait to join you all on the streets of Hollywood to celebrate and raise awareness for the critical work that Marine Toys for Tots undertakes during the holiday season to benefit those who are less fortunate. I can't wait to see you!"

Elizabeth Stanton has been a world traveler her entire life, experiencing the culture of Europe, the wonders of the Far East, and the natural beauty of remote destinations. She started hosting “Elizabeth Stanton’s Great Big World” at the age of 15, and it was watched in 90% of the United States at its peak and is the top-rated show on FOX affiliates nationwide. In the show, she travels the globe with her celebrity friends exploring other cultures, learning about history, and finding opportunities to help those in need, while shedding some light on what others less fortunate are dealing with. The show featured stars like Bailee Madison, Jake T. Austin, Gregg Sulkin, and Garrett Clayton, and filmed in places all over the world, from the USA to Nicaragua to Paris to Beijing. She continues to film new episodes of Great Big World, which has been running for nine years and this is now the 10th year in which it continues to remain strong.

Elizabeth is very passionate about giving back and is a supporter of Marines Toys for Tots Foundation, donating thousands of toys to the organization over the last few years. In addition, she has donated money earned from her show to the homeless men, women, and children of Los Angeles, ultimately helping to feed over 4000 families in Los Angeles for two months. Earlier this year, Elizabeth teamed with Buca Di Beppo to distribute 10,000 meals between Los Angeles and New York to healthcare frontline workers during the COVID-19 pandemic.