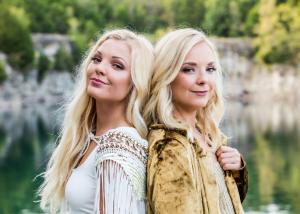 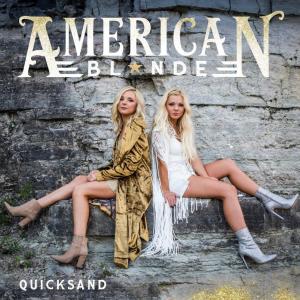 NASHVILLE, TENNESSEE, UNITED STATES, October 22, 2021 /EINPresswire.com/ — American Blonde’s music video, “Quicksand,” offers fans mesmerizing viewing. While the focus is on the natural beauty of Nata and Tinka Morris – the siblings who are American Blonde – videographer Ryan Slattery (Jackson Gillies, Rachel Ross, DJ Unieq) deftly crafts a magical world using powerful contrasts between dappled sunlight and dark, “evil” woods, open fields and confining trails, and by alternating spatial separation and intimacy between the actors. Nata’s regal and controlled movements play off Tinka’s wilder, hair-swirling, head-banging drumming. Ethereal silk dresses are offset with delicate chains and kick-a** boots. There is smoke but no mirrors, big city band action in a half-mown hay field, a barn with no livestock and two women but no men. It’s a rabbit hole of the best kind . . . a tidal pull on the senses that creates a compelling aura of urgency and need. The video was filmed at The Gathering Place in Lebanon, Tennessee.

The Southern Rock-inspired anthem, written by Nata and frequent collaborator Jimmy Nash ("More Than Crazy" Jane By Design, "We Are Made Of Stars" Teen Mom 2) “Quicksand” was released to Country radio last month. The tune quickly racked up over 200,000 streams and is featured on several Spotify playlists – Fresh Finds: Country, Country Summer Vibes, Today’s Country Hits and more. Produced by Cliff Downs, it is the first single for the duo and is available for purchase everywhere.

Keep up with all the latest news on American Blonde at www.americanblondemusic.com

ABOUT AMERICAN BLONDE
A powerhouse of talent, principal songwriter/guitarist Nata and drummer Tinka Morris bring to life the energetic and raw sounds of the Delta – and give testament to the land that nurtured them. As youngsters, they were drawn to the extensive live music scene around their Cleveland, Mississippi hometown – the festivals, fairs and fish fries where music was front and center. The sounds of The Eagles, B.B. King, Lynyrd Skynyrd, The Allman Brothers, Elvis, Stevie Nicks and more echoed throughout their home. Entertainers since their pre-teen years, the siblings have literally lived their lives in the spotlight – and loved every minute of it. Their determination and talent earned them a slot competing in the 2014 Texaco Country Showdown, which led to the release of their first EP (produced by Alabama’s Jeff Cook). Two well-received CDs, released in 2015 and 2018 (produced by hit songwriters Gerald O’ Brien and Catt Gravitt), followed. They landed three Top 25 hits on the MusicRow Chart with “Anything Is Possible,” “I Think Too Much” and “Don’t Let Another Day Go By.” They’ve toured throughout the U.S. and the U.K., sharing the stage with diverse acts, including Maren Morris, Old Dominion, Brantley Gilbert, Easton Corbin, B.B. King, and others. Their high-energy stage shows have earned them spots at CMA Fest, Bluebird Café, The GRAMMY Museum® Mississippi, and The GRAMMY Museum® Los Angeles, among other high-profile venues. The Morris sisters call Nashville home.