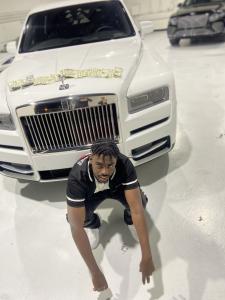 With new music released and much more to be released later, emerging artist playboi h3nny is set to make a name for himself in the music world.

BOLING, TEXAS, UNITED STATES, November 1, 2021 /EINPresswire.com/ — Rising artist playboi h3nny is an extremely talented and versatile artist of this era. Possessing especial expertise in the genre of Hip Hop, the dedicated artist is well-equipped when it comes to expressing his musical creativity and playing around with various tunes. Playboi h3nny is all set to release his brand new album this year.

The album is planned to be released at the end of October 2021. With the release of the album, the artist is looking forward to getting his exceptional sound out there and attracting music lovers from all around the world towards his music. He wants people to give a listen to his original music so that he can leave an everlasting impact on their hearts and make them admire him as one of the top Hip Hop artists of this era. This would result in playboi h3nny amassing a loyal fan base that would support him throughout his musical journey and look forward to his future releases. The dedicated artist released a brand new single titled “Not Safe (feat. Persona)” on February 3rd, 2021. Another single titled “Fiji Dripper” was released by playboi h3nny on August 3rd, 2020. “Hotbox” is another single the artist released on August 3rd, 2020. Along with all these singles getting released one after another, playboi h3nny also released an EP titled ‘The Party Will Never End (feat. Persøna)’ on April 17th, 2020. Consisting of a total of 5 outstanding tracks, the EP is heavily based on rich themes of Hip Hop and Rap music. The way playboi h3nny has blended the 2 genres in order to come up with something so artistically deep and meaningful is commendable.

Playboi h3nny’s music has different flows and styles as some people say it calms them while others get hyped listening to it. What makes his music unique is the various styles and musical elements he blends together to come up with a direction of his own. Along with Mac Miller, playboi h3nny looks up to a lot of other artists including Lil Skies, Gunna, and Lil Baby.

About
Going by the stage name playboi h3nny, the artist’s actual name is Henry Mable. He was born in Houston, Texas and knew he wanted to do music from an early age.

Playboi h3nny recorded his first-ever song in 2017 which was the year he graduated high school. He draws his inspiration for making music through Mac Miller, Lil Baby, Gunna, and, Lil skies amongst the rest legendary artists from the industry.