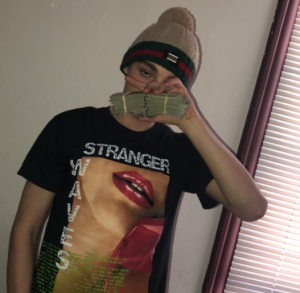 WAUSAU, WIS., UNITED STATES, November 3, 2021 /EINPresswire.com/ — s k splash today announced that he is making waves out of Wisconsin. The emerging hip hop artist from the Midwest, who is originally from the State of Florida, is receiving a well-earned “blue checkmark” on SoundCloud. All of his music projects are extremely popular with fans on Spotify, Instagram, Amazon and Apple Music. s k splash’s current releases are a hit and receiving great feedback and reviews from his new fans. In addition to his music, s k splash has recently founded a new clothing line called h2woe WaterSports.

The performer successfully dropped a great song in the summer of 2021 called “FaceShot” that has accumulated 35,000 streams and is on a trajectory for many more downloads. s k splash has a huge following and fans love his song, distributed by DistroKid, “Just a Dream – It Comes In Waves.” The launch and success of “FaceShot” made it possible for s k splash to achieve his blue certification check mark on SoundCloud.

On October 1st, s k splash collaborated with blxckhexrtmxnte and released the song “Off the Top,” which is a dark song and perfect for Halloween. The song has close to 10,000 streams on SoundCloud. His lyrics bring fans of hip-hop and cool beats to everywhere his songs are streaming. One example of his creative writing is, “On the deepest dawn of divine, my eyes will open for the very last time.” s k splash is planning to release his latest single before the end of 2021, and will then go back into the studio, devoting his time to another exciting new project.

“I was inspired by my neighbor to begin making music,” said s k splash. “He showed me the basics and once I understood the technology, I never stopped. Originally, I made house music and dub step. When I moved to Wisconsin, the introduction of hip-hop changed my life. I met talented people who wanted to rap so it was time to switch up and start making beats. At 16 years of age, I was excited to start recording on my own with the same lucky usb microphone I use to this day.”

There is a popular, growing rap scene in Wisconsin. The Midwest has the reputation of attracting the creativity of hip-hop and rap from Milwaukee, Detroit and Chicago, but Wisconsin seems to have the hottest new starts on the scene.

Information about his ongoing artistic efforts can be found on Instagram, SoundCloud and Spotify, Amazon and Apple Music. https://www.instagram.com/psiloskybin/
https://soundcloud.app.goo.gl/YuuVqbM5tPdSrepNA