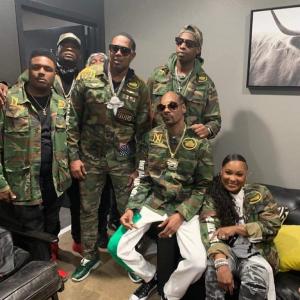 Backstage with some of the NL Soldiers

We are bringing the fans all the hits from the No Limit catalog, this is for them. We appreciate all the love and support. Twenty five years later, we couldn't do it without them.”
— Master P

LOS ANGELES, CA, USA, November 4, 2021 /EINPresswire.com/ — Percy Master P Miller and the No Limit Soldiers celebrate twenty-five years of history with a No Limit Reunion tour. The group has been doing spot dates for the last month, and now they are going out full force to celebrate the anniversary.

With performances selling out, the fans are treated to all the original No Limit hits. On hand with monumental performances are Master P, Mia X, Silkk the Shocker, Mystikal, Mr. Serv-On, Mercedes, Fiend, Mac, along with surprise guests. The collective will bring all the original NL songs and more. This show will give the attendees an evening to remember!

About
Master P (Percy Miller) – Founder of No Limit Records, the most successful independent label of the nineties, Percy is an accomplished businessman and Hip-Hop icon. He is the owner of several companies, a real estate investor, Rap Snacks/Rap Noodles, LAGREAT, food products, Uncle P’s food line, Moneyatti shoes, and a true philanthropist, giving back to underserved communities for over twenty years. He is also on the lecture circuit, teaching young people about entrepreneurship, and the importance of education, dedication, and determination.

No Limit Records – No Limit has sold over 100 million records worldwide, making it the most successful independent label of the nineties. The brand was started in the south and soon ventured around the country and eventually worldwide. NL has been successful with music and with film, and many other endeavors under its umbrella.