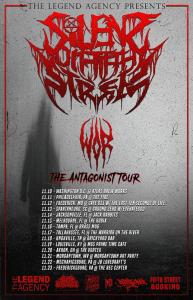 The 3 metal bands will be hitting the road next month to perform in 14 different cities on many new stages across the east coast.

LOS ANGELES, CA, USA, November 7, 2021 /EINPresswire.com/ — WoR, the metal band based out of Raleigh, North Carolina is excited to announce their first official tour with Silent on Fifth Street and Blood of Angels. Presented by The Legend Agency, “The Antagonist Tour” begins on November 11th, 2021 in Pennsylvania and will showcase the 3 metal bands back to back in 10 different cities across the east coast.

By the spring of 2019, WoR had begun to debut their music at live shows throughout the southeast region of the United States playing with the likes of Upon A Burning Body, Atilla, and Warbringer just to name a few. Their debut album entitled Prisoners, via Bungalo Records/Universal Music Group was released earlier in August 2020.

“Prisoners is a compilation of our best songs that we created together and the album’s song sequence showcases our band progression over time.” shares Bobby Demoss. “We’re very excited to hit the road for our first official tour! We had plans to start touring in early 2020, but the pandemic paused the whole world for almost 2 years, so this is a very exciting time for us.” The band also had a successful album debut on the Liquid Death Stage at the SOLD OUT four day rock experience Blue Ridge Rock Festival located at the Blue Ridge Amphitheater in Danville, Virginia on Saturday, September 11th. This show was one of WoR’s biggest audiences to date with a sold out attendance of 160,000 fans.

LISTEN TO WOR: Spotify
CONNECT WITH THE BAND: Instagram