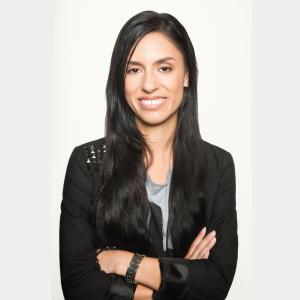 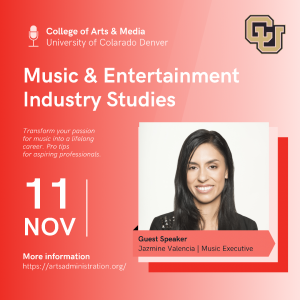 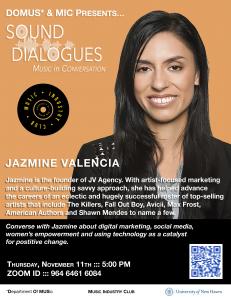 A firm believer in giving back by mentoring the youth and the next generation of female executives in the music industry, Valencia spends a lot of her resources holding seminars, networking sessions and volunteering with female-led groups.

I've learned from Richard Branson to always put employees first. Having a great team that treats my business as their own is a necessary investment for the immediate future and long-term.”
— Jazmine Valencia of JV Agency

Valencia will present at 12:30 p.m. to 65 students who are enrolled in the marketing course with the University of Colorado Denver’s Associate Professor Storm Gloor, who spent many years with Hastings Entertainment while working within the music industry in various capacities before joining the faculty.

In the afternoon, Valencia will present again at 5:00 p.m., where she’ll be featured on the University of New Haven’s “Sound Dialogues,” a conversational series that unites composers, mix engineers, industry executives, music educators, performers, and musicologists. Behind this informative dialogue is Mark Tavern, who has more than 20 years’ experience in the music industry, is a passionate educator, as well as an artist manager, consultant, administrator, and arts advocate. He’s worked with artists such as Ariana Grande, Justin Bieber, Mariah Carey, Etta James, and Carrie Underwood, to name a few.

“I’m very honored and pleased to speak to both universities and share my insight with the next-generation of up-and-coming artists and music industry pros,” says Valencia.

As the founder and president of JV Agency, a management and marketing boutique agency in Beverly Hills, Valencia uses an artist-focused marketing and a culture-building savvy approach, implementing key branding strategies and sponsorship campaigns while culling from a strong industry network. Handling every aspect of marketing for a single, album, or video release for all levels of musicians and genres, the agency prides itself on being connectors and culture creators.

“Our mission is to bridge cultural and geographic divides between makers and users,” says Valencia, who uses technology as a catalyst for positive change while leveraging a vast reach to give a platform to connect.

During her tenure as Director of Digital Marketing at Island Def Jam/UMG, combined with her work at JV Agency, she has handled 2000 album launches, guiding and advancing the careers of an eclectic roster of top-selling artists, including The Killers, Fall Out Boy, Avicii, Max Frost, American Authors and Shawn Mendes, among many others.

“As I was just starting in my position in digital marketing at Island Def Jam, I was introduced to Jon Bon Jovi as the digital ninja and he said to me, 'I’ve been doing this longer than you’ve been alive, but I know that you are one of the smartest people in this room and I’m looking forward to working with you!' It was great to work with a band like Bon Jovi, as well as other artists like Mariah Carey and Rihanna, and bring them into the digital music space.”

Valencia has been featured in Forbes, CNBC, Los Angeles Times, Medium.com, Thrive Global, and B Squared Magazine to name a few. Widely recognized not only for her business and creative acumen but for her down-to-earth attitude and motivational approach with her team and artists alike, she firmly believes her most important investment has been and continues to be her team.

She told Forbes Magazine in an earlier interview, “I've learned from Richard Branson to always put employees first. Having a great team that treats my business as their own is a necessary investment for the immediate future and long-term.”

In addition, she’s a firm believer in mentoring the youth and the next generation of female executives in the music industry. “I spend a lot of my resources holding seminars, networking sessions and volunteering with female-led groups.”

Born in Paris, France, Valencia has traveled all over before moving to New York, where she started her career in the music industry.

“I started in the music industry as an intern at the Island Def Jam Music Group and learned anything and everything I could about marketing while working my way up the Digital Marketing department. When I started my own company, it was by pure serendipity and by ‘doing favors’ for artists I’ve known for years. Before I knew it, I had 10 artists I was working with and things just grew from there.”

Now with over a decade in the business, Valencia's foray into music has proved to be as successful as her digital marketing initiatives. Aside from managing her own roster of artists, she lends her expertise as a "Marketing Industry Mentor" to the Musicians Institute, as well as she listens to artists' submissions via a new start-up venture, Avenue AR, which is a global music delivery platform that connects independent artists, writers, and producers directly with industry executives.

“I thought Avenue AR was a great idea to have a platform where industry professionals can help up-and-coming independent artists as well as it's really exciting to have the Grammy® Award-winning plugin company Waves Audio be a part of this.”