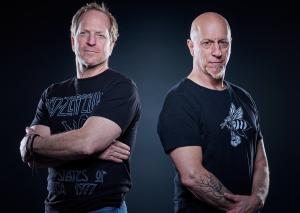 NEW YORK, NY, UNITED STATES, November 16, 2021 /EINPresswire.com/ — The Chicago-based rock band, The Simple Radicals, released their latest song called “Let’s See What You Got”, which includes a pulsing rockabilly sound that will even make fans of ZZ Top envious. To further amplify the energy and dynamics, the song was used as a soundtrack for sports-themed videos including wrestlers executing some astonishing moves and breathtaking aerials.

The song is available on Spotify, Apple Music, YouTube, and the band’s website www.thesimpleradicals.com. It's been featured on several Spotify playlists including Rock Workout 2021, Best TikTok songs 2021, and Gaming Rock & Hits.

The song has already made its way to Melbourne Australia where it is generating attention and excitement Down Under.

“Let’s See What You Got” was recorded at Griffin Audio Media Studio in Grayslake, IL and Factory Underground Studio in Norwalk, CT.

The song is another follow-up to their album “New Revolution” which featured the release of their lyrical video “New Revolution”, that ironically foreshadowed some of the political and social unrest that is being experienced across the country today.

About The Simple Radicals
Inspired by the sounds of Pearl Jam, Foo Fighters, Tom Petty, Green Day and Cheap Trick, the Chicago-based rock band The Simple Radicals captures the passion and energy of their collective musical experience to create pure, visceral rock 'n' roll – poignant, from the heart, topical and direct. The band has been invited to play showcases at SXSW as well as perform in music festivals alongside bands such as Jefferson Starship, Puddle of Mudd, Molly Hatchet, Blackfoot, and Blue Oyster Cult.

Benedict Lowe, Head of Publicity and Marketing
The Simple Radicals
thesimpleradicals@gmail.com
Visit us on social media:
Facebook
Twitter
Other

Let’s See What You Got