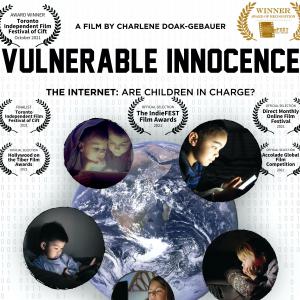 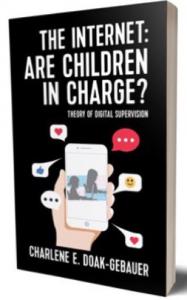 My family member was victimized at the age of four, and later killed by a drunk driver at the age of 22. I began my quest for online child protection in her memory.”
— Charlene Doak-Gebauer, Producer/Director/Author/Playwright

LONDON, ONTARIO, CANADA, November 18, 2021 /EINPresswire.com/ — What is the most effective way to protect children online globally?

Charlene Doak-Gebauer wanted to produce a documentary about online child protection and began her journey in September 2020. Her main objective in writing two books, creating a Theory of Digital Supervision, and producing a documentary, is to help parents, caregivers, and professionals in protecting children using user-friendly methods of supervision for children as they are on the Internet using digital devices.

One great challenge she wanted to overcome before filming – COVID exposure could be an issue.

With COVID in mind, Charlene used her Computer Science Specialist in Education background, and her Network Administrator experience and training, to film the documentary virtually to avoid COVID exposure. This film is unique from two perspectives – virtual filming and her Theory of Digital Supervision. With virtual filming, participants were filmed in their country of origin and in their homes – 'on location filming without travel'.

Her dream came to fruition in October 2021 when the final cut for the documentary was completed. Throughout the year, she asked many friends and acquaintances if they would like to be a part of the documentary, and was never refused. The friends were from when she was a little girl, to several friends she met as she spoke in different countries over the past few years. "The people who volunteered their time and expertise has been astounding. Every person I asked wanted to be a part of this global initiative to protect children online, and saw the need.", shared Doak-Gebauer.

The film is based on Doak-Gebauer's Theory of Digital Supervision for proactive online child protection. She explains it is too easy for parents, caregivers, and professionals to believe either hardware and software will do the job of protecting children; or, that children are able to make decisions online for their own protection. "This generation is too independent, and being given too much ownership for their decisions online. We must digitize our parenting skills", explained Doak-Gebauer. Charlene explained further that too many adults are having difficulty determining with whom they should speak and trust online. Our children are far too innocent and lack life experiences to be able to make such crucial decisions.

"There are 30 people involved in the film – from parents who have had negative experiences with the children being victimized online; to experts who speak from training and experience about the realities of what is happening on line with our children; to scenes from a Digital Supervision play, for which Charlene is the playwright, with children and adults illustrating real-life situations that can happen online; to Charlene providing methods for parents to use to supervise their children, in a user-friendly way."

"I never believed the documentary would win awards at film festivals! I have had no expectations and hoped it would speak for itself.", said Doak-Gebauer with astonishment. "To date, Vulnerable Innocence has been accepted to five film festivals, won the Award of Recognition: Contemporary Issues/Awareness Raising at the IndieFEST Film Festival in California; Award for Best Canadian Documentary at the Toronto Independent Festival of CIFT."

Charlene began her journey in memory of a family member who was victimized by neighbours. "My family member was victimized at the age of four, and later killed by a drunk driver at the age of 22. I began my quest for online child protection in her memory.", explained Charlene. "Digital Supervision was created gradually through my research, Computer Science background, and personal experiences."

The documentary is in the final stages of readiness for broadcast, and will be engaging a professional team to circulate the documentary globally, to help protect all children. "All children matter everywhere – their online protection is necessary." said Charlene. The global issues surrounding this challenge is emphasized in the documentary by people from around the world, who explain this is a problem in their respective countries. Charlene emphasized this has been a great team effort, from the production team to the various volunteers in the film. "We have proven we can work together without borders and oceans to protect our precious children worldwide," said Charlene with pride. Learn more about the documentary and view the trailer.