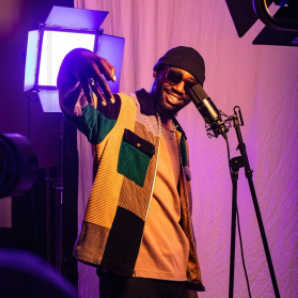 TORONTO, ONTARIO, CANADA, November 18, 2021 /EINPresswire.com/ — Kyle Shoge professionally known as K-T3 or K3 is a Nigerian-Canadian hip hop music artist.
K3 is a diverse artist with a sound that could be considered unique and has partnered with GMA with a new project cooking up.

This new and highly anticipated project is titled “spirited away” and is set to be released later in December on all distribution platforms. In this project, K3 worked with top Toronto producers and colleagues such as Underdawg buju and creative director Danesi. However, K3 will be dropping a single from the album titled “So High” on Friday 6th November along with amazing visuals.

This project for K3, marks transitions in his journey towards faith and life as a whole. K3 is breaking grounds and is hopeful his sound would resonate within the people it gets to. K3’s musical influences are Burna Boy, Nigerian singer and Travis Scott, American rapper. His experiences and emotions shape his style of music and K3 is inspired to make sounds that push stereotypical barriers. His latest album “True Love” February (2021), had a blend of sounds and one could say that there is a sound for everyone on it. K3 subsequently released a single Too Good July (2021). The single gave off a summer time vibe with an Afro rhythm.

K3 is excited to share his new project with the world and his supporters which he cares deeply about.

K3’s early childhood was spent in the city of Portharcourt, Nigeria where he picked up his musical interest.

He made a name for himself by making music and performing at local shows and for entertainment. He then moved to Toronto, Canada and continued making music more professionally and has since dropped two albums, one titled “We’ll be fine” which is of the hip hop genre and subsequently “True love” which is of the Afro-beat genre.

K3 is driven to soar higher in his musical career and to share his gift with the world.