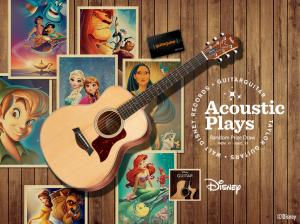 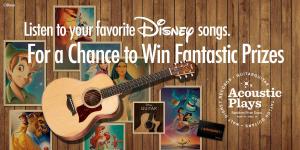 Getting the opportunity to work with Disney is amazing, you know the strength of the song is guaranteed and it makes the creative process all the more enjoyable.”
— John Connearn – Taylor Artist

“The Disney Guitar Playlist presents our most beloved Disney songs in calming, soothing arrangements, perfect to relax or work to throughout the day," says Rob Souriall, VP of Marketing at Disney Music Group. “We hope our partnership with Taylor Guitars and GuitarGuitar inspires guitar players everywhere to pursue their own musical creativity.”

Walt Disney Records worked with Taylor Guitar's endorsed artist John Connearn to record his unique take on three songs, including brand new acoustic renditions of “When She Loved Me” (Toy Story 2), “Moving Right Along” and “Can You Picture That” (The Muppets Movie). These tracks will be featured in the official Disney Guitar Playlist, available wherever music streams.

"Getting the opportunity to work with Disney is amazing, you know the strength of the song is guaranteed and it makes the creative process all the more enjoyable", says Taylor Guitars artist John Connearn. “My nostalgic connection to Disney meant that these songs all had a sentimental value and it made crafting the arrangements for them a real pleasure. Thank you, Taylor and Disney!”

One grand prize winner of the draw will receive some amazing prizes including an Amercian Dream 17e Blacktop Taylor Guitar, a Disney Vinyl Collection and a £100 GuitarGuitar gift card. Two runner-up winners will receive a Disney-branded Taylor GS Mini guitar, a £100 gift card and a Disney Vinyl Collection. Seven single prize winners will each receive a £100 gift card.

"Like Disney’s legacy, the guitar is a means to entertain, inspire, and create lasting connections between friends, parents and children,” says Tim Godwin, Director of Entertainment Relations at Taylor Guitars. “We’re happy to be able to make these songs and these instruments accessible to fans and young guitarists.”

ABOUT TAYLOR GUITARS
Founded in 1974, Taylor Guitars is one of the world's leading manufacturers of premium acoustic guitars. Renowned for blending an innovative use of modern technology with a master craftsman's attention to detail, as well as their pioneering sustainability efforts, the company's guitars are widely considered among the best sounding and easiest to play in the world. Many of today's leading musicians make Taylor their guitar of choice, including Jason Mraz, Jewel, Zac Brown, Sarah McLachlan, Shawn Mendes and Ben Harper, among many others.

ABOUT GUITARGUITAR
Founded in 2004, guitarguitar has stores in Edinburgh, Birmingham, Camden, Epsom, Newcastle and Glasgow.
Each store stocks over 1000 guitars, staffed by passionate experts in guitars, musical instruments and audio tech, and now employ more than 150 people across the UK.
Guitarguitar also offers a range of services to help guitar players get the most out of their music; instrument servicing and repair, instore events, roadshows, workshops and much more.