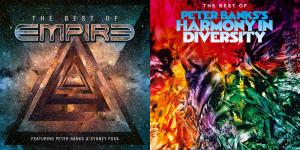 ASHEVILLE, NC, USA, November 19, 2021 /EINPresswire.com/ — Two very different aspects to the career accomplishments of original YES guitarist Peter Banks are being celebrated in the release of two separate compilations. Peter Banks passed away in 2013 but his repertoire has been carefully curated so it can be appreciated for generations to come.

The Best of Empire

Peter Banks co-founded Empire with co-writer and lead vocalist, Sydney Foxx, and the band recorded three albums of material in the 1970s, however, it all remained unreleased until the 1990s.

This hard-to-find material was collected together into a 3 disc set, The Complete Recordings in 2017, and The Best of Empire draws on that material. These recordings showcase Peter in a rock band setting and include their best-known song, “Sky at Night”.

Empire was very much a collaborative band between Banks and Foxx and this compilation was overseen by Foxx who recalls, “Working with Peter was a wonderful experience. Although he was the 'leader of the band' and the 'producer', he allowed me total freedom to write the melodies and lyrics that I wanted to. We never had any disagreements about the music we worked on. We split everything 50/50 and got on with it. He was inspiring, fun, and always creative. Never running out of ideas! I enjoyed the long rehearsals getting everything perfect, and our many 'all night' mixing sessions in the studio. I am very grateful to have had the opportunity to work with him. And so proud of the work we did together.”

The Best of Empire is available on CD here: https://geni.us/BestEmpCD

The Best of Harmony in Diversity

Peter Banks co-founded Harmony in Diversity in 2004 with the band also featuring Andrew Booker and Nick Cottam. The musical style of this trio significantly differed from Empire with a repertoire of improvised instrumentals.

The music of Harmony in Diversity was collected together into a 6 disc set, also called The Complete Recordings, so this compilation gives fans a selective taster.

Andrew Booker said, “This is a terrific selection of HiD pieces that pushed the needle uppermost on our 'ooooh, I really like that bit' detectors. It’s a surprisingly multi-directional mixture too, from bare-faced live improvisations, to the highly structured latter-day arrangements, with some oddball fun here and there, and Peter’s sublime and searing guitar coursing through the whole lot.”

Nick Cottam added, "It is great that the eclectic elements of HiD will now be available on a more easily digestible one CD format."

The Best of Harmony in Diversity is available on CD here: https://geni.us/BestHiDCD