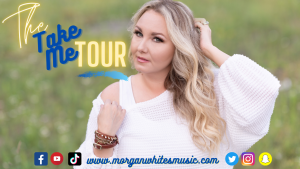 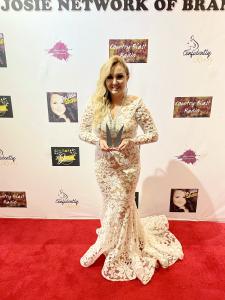 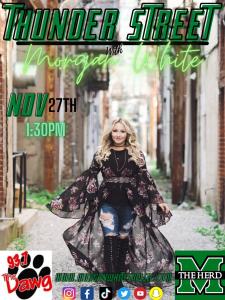 I pride myself on a good, clean family show that every age can enjoy!”
— Morgan White

NASHVILLE, TN, UNITED STATES, November 23, 2021 /EINPresswire.com/ — NashTown Entertainment recording artist Morgan White recently released NEW Single & Official Music Video "TAKE ME" to Worldwide Radio & Television and is climbing the charts. Born in the Southern coalfields of West Virginia, Morgan White has been dazzling audiences with her LIVE show. Morgan is no stranger to the Country Music scene, already with an impressive resume opening up & sharing the stage with many greats such as Keith Urban, Brad Paisley, Deana Carter, Trick Pony, and Waterloo Revival just to name a few. This sassy, strikingly powerful, ultra-entertainer is bound and determined to follow in the footsteps of the legends that have influenced her like Reba McEntire, Dolly Parton, Martina McBride, and Carrie Underwood. While those are some big shoes to fill, this little lady is up for the challenge. Morgan is a true vocal stylist.

Recently at the seventh annual Josie Music Awards, Morgan was honored to receive the award for 2021 MODERN COUNTRY FEMALE ARTIST OF THE YEAR. “I’m so excited to let people hear my new music!” she stated. “I just want to be true to myself and to my fans.” The Josie Music Awards is the largest internationally recognized independent award show organization and one of the most sought-after awards in the independent music industry. The award show took place in September 2021 at the Country Tonight Theatre in Pigeon Forge, TN to a sold-out crowd.

Morgan is currently touring with her band, headlining major venues, state fairs and festivals. Morgan's high energy show is a blend of Modern Country, Rock, Pop, and Bluegrass. " I pride myself on a good, clean family show that every age can enjoy!" Morgan said. “We hope to bring our family friendly show to your area.”
NashTown Entertainment is excited to announce recording artist Morgan White's TAKE ME TOUR. Morgan kicks off the TAKE ME TOUR Saturday, November 27th in Huntington, WV featured at Marshall University’s final home game FanFest THUNDER STREET at 1:30pm. There is still some availability in 2022 to book Morgan’s new & exciting show to be a part of your entertainment lineup.